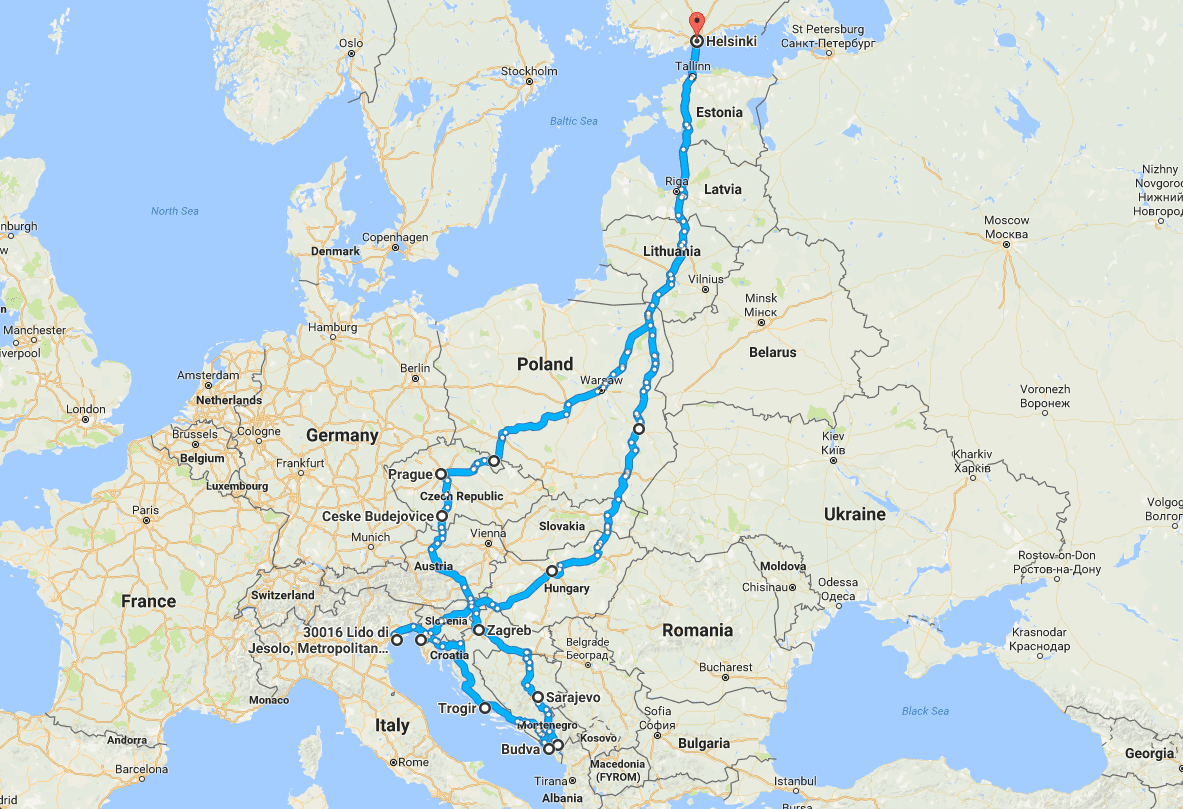 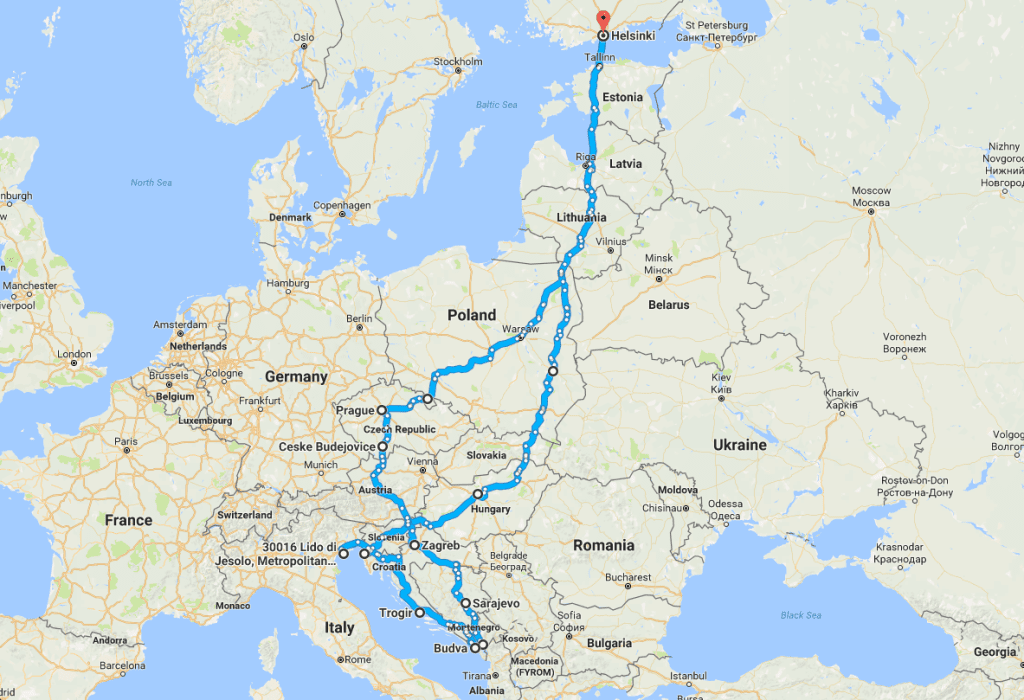 Set the direction to Portoroz in Slovenia for a tour of the eastern Adriatics, eventually ending up in Montenegro, near Albanian border. The ride through Europe to Adriatic is relatively long to begin with. The beauty in biking however, is to really see and feel the change in one’s surroundings. Our route took us through Estonia, Latvia, Lithuania, Poland, Slovakia, Hungary, Slovenia, Italy, Croatia, Bosnia-Herzegovina, Montenegro, Austria and Czech Republic. This time we headed south through the Baltic states, on the Via Baltica road.

The condition of the road leading through the three Baltic states is generally very good today. A lot of work has gone into its repairs and there were not even any exceptional road works to be aware of in the summer 2016. The stretch is somewhat dull if you just use it to take you through the Baltic states but it is also very easy to cruise. Downside is the heavy traffic, often a lot of trucks and camper vans with only one lane to each direction.

Entering Poland and Slovakia, the traffic becomes a real pain with the huge number of trucks and roadworks on narrow roads. Hungary and Slovenia have great motorway systems through the countries at least via Budapest. The Polish chaos is subject to change in a few years time. There are major improvements being made via Bialystok and after sampling some of the new stretches, it all looks really promising.

Hitting a thunderstorm, we took refuge in the Budapest Harley dealer, where one of our bikes got serviced and I decided to use the time provided by the thunderstorm to change my front tyre. Very professional and courteous service by the principal and the mechanic Attila, recommended by us all. The dealer also has a large restaurant upstairs and the place is worth a stop just to go and have a browse around.

After spending our first night in a road-side hotel in Poland, lake Balaton provided a nice change with some evening entertainment. The following day, Hungarian and Slovenian great motorway systems took us to Portoroz on the Adriatic coast in Slovenia for the European HOG Rally weekend. Beautiful beach and plenty of entertainment. The near-by historic town of Piran is worth a visit and there are boats for hire for the sea route.

Portoroz was a great location for HOG rally and it was easy to end the rally with a ride to Venice, just around the corner. I decided to stay at Lido di Jesolo / Lido di Cavallino, which has long beaches, many restaurants and bars and regular buss-boats taking you to Venice, Murano, Burano, Lido, plus many more. Undoubtedly it is also much more affordable than the main city of Venice. Marco Polo airport is only 35 km away, should you need to pick up or drop off someone.

Venice TIP: For ease of travel and more frequent services, when you buy your boat ticket, get a day ticket for public transportation. They are valid 24h and allow you to hop on a bus for the harbour, use of water busses between the islands and in the canals in Venice.

Croatian Coast and Some Old Towns 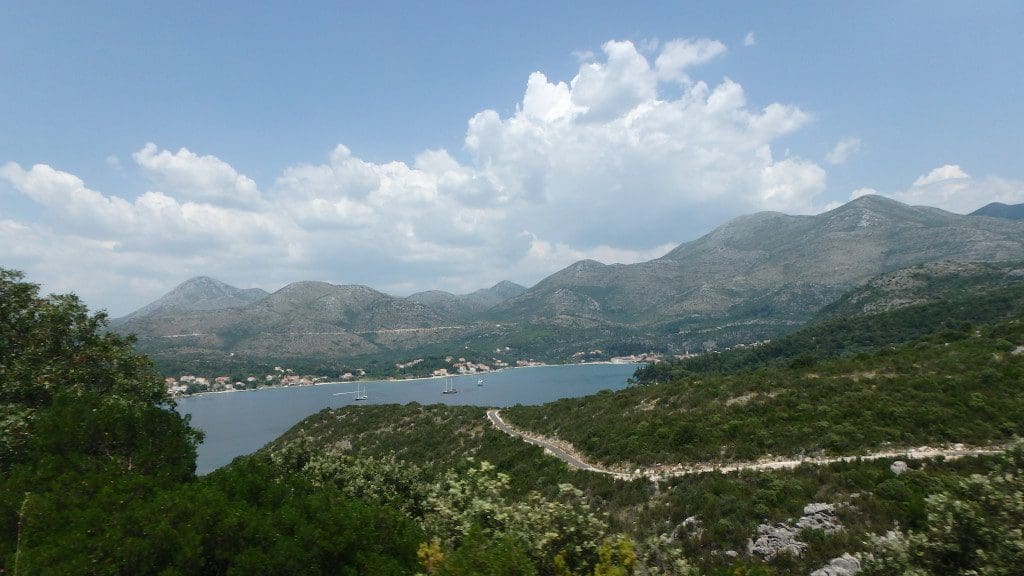 Riding down the eastern shore of the Adriatic sea to Croatia is fantastic. There is always the road on the seaside, providing a slow and scenic ride. It is slow particularly when the tourist resorts have guests. Roads are narrow, villages small and the traffic is mainly people just hoping to do their shopping etc.

Even how charming they are, these beach front roads can take their toll on the biker on a hot day. But luckily there is a choice. It is possible to make some quicker progress by using motorways a little inland. They are really fast without much traffic and you still get to enjoy the scenery, be it a little different from the very coast.

A good choice is to alternate between the roads for best of the both worlds!

After having done some sailing in Croatia earlier, I knew an old historic town of Trogir. This was our next stop and I can really recommend getting a hotel in the Old town and sampling some of their great restaurants. The old town harbourfront is where people congregate in the evening for some food, drinks and to be seen.

Riding further down to Dubrovnik is pretty much like the road to Trogir, really enjoyable and again with the coastal and inland routes – with a little stretch of Bosnia-Herzegovina, unless you go island hopping. In Dubrovnik, again the old town is a must.

Dubrovnik TIP: Be aware that in the old town there are actually two trendy outdoor bars outside the city walls on the narrow cliffs towards the evening sun. Ask locals, they can tell. Otherwise the holes in the wall leading to these bars are barely noticeable. While sipping your drink, you may also see youngsters jumping off the cliff to the sea. 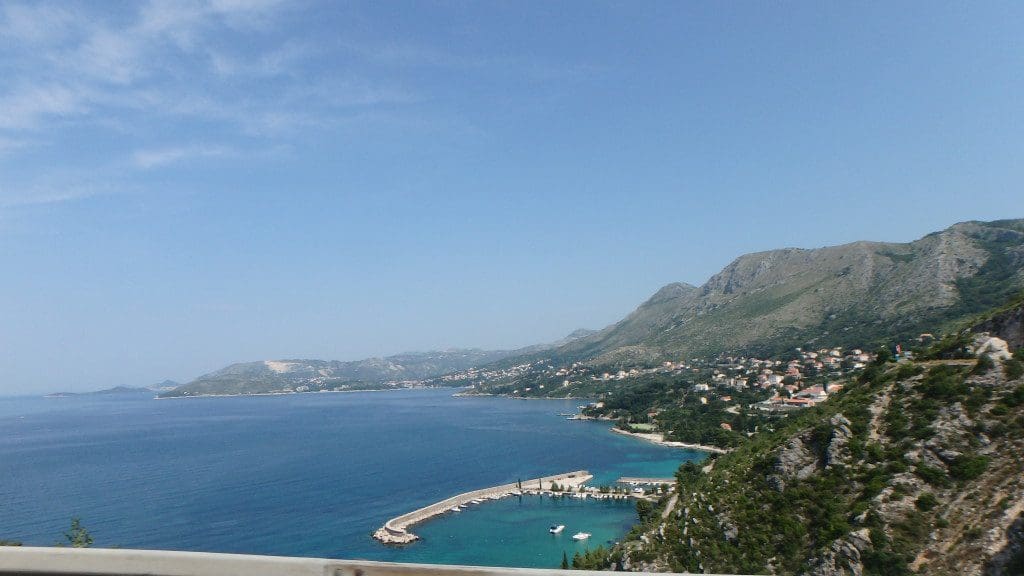 Croatian crossing to Montenegro was a reminder that one was leaving the EU. Thorough examination of papers with passports stamped. Here they also needed the bike’s green card. Montenegro is peculiar as it is using Euro as currency but it is not an EU country (although a prospect, a candidate).The use of euro is explained by their earlier use of German Mark before Euro-time.

Montenegro and particularly the coastal holiday town of Budva is a very Russian resort and has a very Soviet flavor. Even our hotel advised us to keep the receipt from the hotel, as we may need to prove where we had been or otherwise be subject to 100 euro fine at the border!

Heading towards Sarajevo in Bosnia Herzegovina from the Capital of Montenegro, Podgorica, you can find some most amazing views and canyons along the road. Europe’s deepest canyons can be found along Tara river, further east.

In places, the road leading from Podgorica towards Sarajevo in Bosnia Herzegovina is literally a paved cowpath E762 with tarmac sometimes just on one side of the narrow road. Cannot believe it is the road between two capitals. Tunnels are without any lights and generally seem unfinished.

Border crossing on M18/E762 happens vie single lane bridge and (inexplicable) hand gestures are used to guide the traffic. The gestures seem deliberately vague and the border controls seems to have a very popular pastime in bullying locals – shouting, facial expressions, hand gestures and pointing with fingers. To the locals apparently the norm but the officials clearly are more relaxed with the tourists. 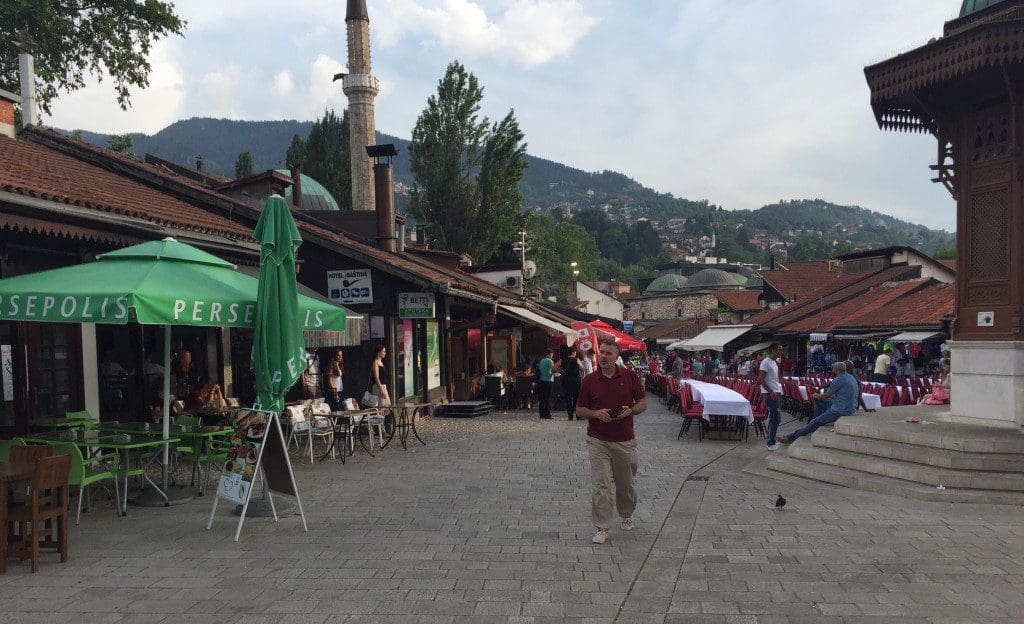 Sarajevo is a very different and a very cosmopolitan town. The war is within living memory and the girl at hotel reception even casually referred to fighting as something they just do occasionally as a tradition! Must be very dark humour but they do have the cemeteries as a reminder. Or she knows her history.

In Sarajevo you have muslim women dressed in burgas like phantoms walking next to nearly bikini clad western teenagers, openly gay couples, everyone together. Alcohol is freely available but all meat appeared halal.

The old town Sarajevo is different to the fortresses in the coast but for again the central place where locals and tourists come to be entertained. It was ramadan and in the evening, long tables were set for muslims, courtesy of Turkey! Minarets are everywhere but I did not hear the customary bellowing, perhaps a concession to other faiths.

From Sarajevo we headed again to Croatia, this time further inland to the capital, Zagreb. To the old town of course and the pedestrian only -area. Again another beautiful city. What set Zagreb apart from the many other cities was their exceptionally delicious food! We followed the hotel’s recommendation to restaurant Vinodol and were not disappointed.

Heading back home, we took the route through Slovenia and Austria to Czech Republic and České Budějovice – home of the original Budweiser beer!

We  Certainly found that the beer in the Adriatic area was very good practically everywhere. Often with less hops but that alone did not do the trick since I do enjoy some stronger beers as well – with more hops that is. Just to be sure we also stayed a night in Prague, admiring the old town and enjoying the atmosphere. We opted for perhaps a more peaceful hotel very near the Charles Bridge, on the opposite bank of the river, still in old town.

Before heading for our last leg back on Via Baltic and to the ferry from Tallinn to Helsinki, we stayed in Warsaw, Poland. Another reminiscing of the soviet times. The hotel had had some upgrades but the service was left to the 80’s. When asking the reception for recommendations for restaurants, the response was ”how would I know what you like?”. Buy fuel from the station and you can not use their toilet! Need another coin… If toilets work that is. Poland would not be one of my preferred travel destinations, unless the idea would be to have a soviet experience. It will be good to have a proper motorway through the country…

A completely different experience was Kaunas in Lithuania. Kaunas is the second city in the country. Kaunas has a very lively old town and a long pedestrian walkway through the town. Trendy bars line the street and good restaurants are side by side in the old town. This is the place for the beautiful and trendy people to be seen. I do not think we saw any other place with so many beautiful people walking, having drinks, having dinner or just otherwise socializing in the street or the tables set outside. During our visit some 80 per cent were women of all ages. Looking good. And food was out of this world!

Now this is a town I will visit again!