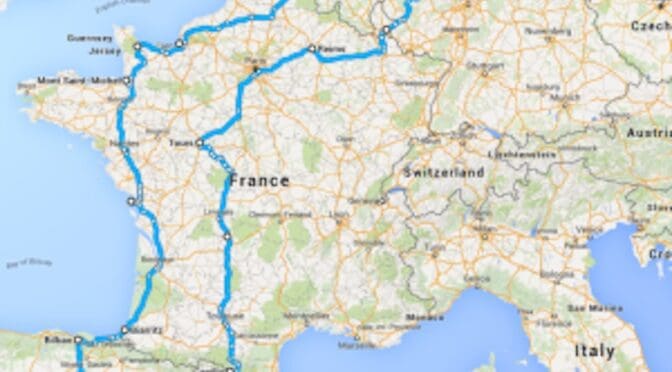 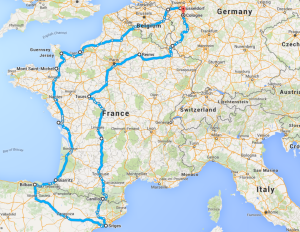 This time we wanted to see the Atlantic coast of France and to start by visiting the sights of Normandy, commemorating the D-Day invasion 70 years earlier. From Normandy we followed the coastal regions all the way down to Spain. Returning through Andorra and central France, not forgetting Champagne. Any point we stopped would have merited for a longer stay but like any traveller wanting to see yet something different, we kept going. 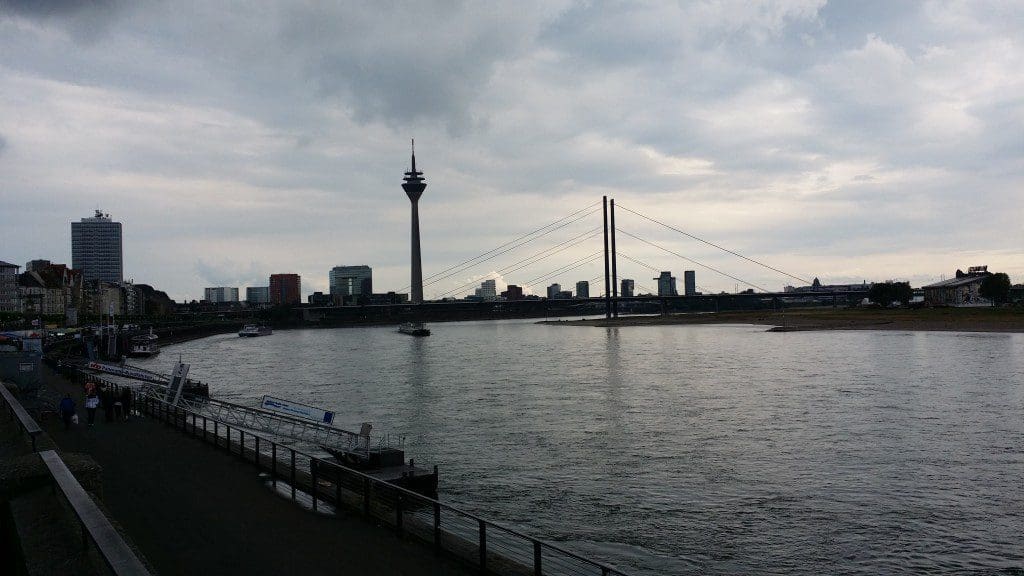 To start our journey, our route took us on a ferry from Helsinki to Lybeck, riding further to Dusseldorf, from where we rode through Holland and Belgium to France.

Deauville and the D-Day Beaches 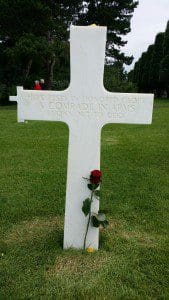 Our first destination in France was Deauville in Northern France. Deauville is a picturesque small costal town that has its own unique feel with the harbour, small restaurants, bell tower and a small city centre. Why we chose Deauville? Well, besides Deauville being very ”French” and ideally located, when we started off from home, our neighbor yelled from the window: ”GO SEE DEAUVILLE, IT IS BEAUTIFUL!”. What other reasons would one need?

From Deauville the Normandy D-day coast and Calvados are within easy reach. The war sites, museums and exhibitions in the area are really good and demonstrations are life -like. All well worth seeing. Cemeteries are touching, the coast majestic. You can not visit the places without being moved by what you see.

Riding down the west coast, only some 150 km from Omaha Beach, is another magnificent place, Le Mont-Saint Michel, a fort, a monastery and an island community. It lies some 600 meters from the mainland and the road has historically been cut off by the rising tide. Now a new road has been built and a bus runs regularly between the island and mainland. 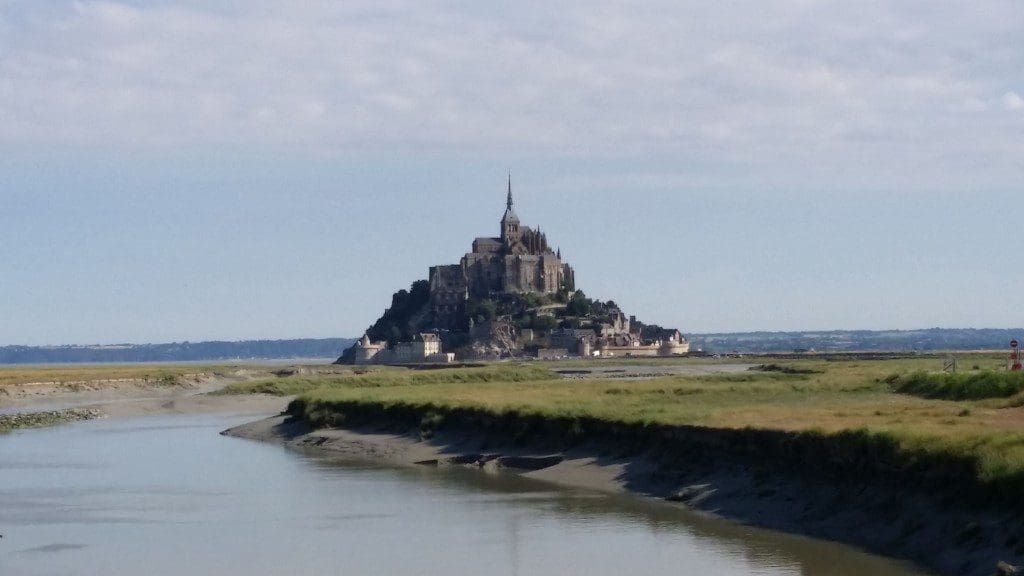 The mainland tip before getting to the island is run in a very French way. The area has hotels, restaurants and shops with plenty of parking space. There are however, also parking places outside the hotel area and the area where the restaurants and hotels are, is gated for some reason. The gate only opens every hour and it costs you €10 to go through. Busses from the outside parking area run  through the gate regularly, though.

Oblivious to this bus/parking system and as we did not fancy to leave our bike in some parking lot far away, we rode to the gate and I pressed the button at the gate. Someone replied and I explained we needed to get to our hotel, which we could see some 300m away. I did not understand the reply but helpful locals explained the system to us. Regardless, I tried explaining again to the voice on the intercom but only got back the same noise that I could not understand. We were eventually helped by the fact that I was actually creating a road block for the busses trying to get through. Eventually the gate opened for the busses, me in the front, and we got through and to our hotel car park. When I asked about the system at the hotel, no one could explain why it was as it was.

But Le Mont-Saint Michel is magnificent and worth seeing. As it is a bit of the main road, it is also a good place to stay overnight. You can stay at the tip of the mainland or on the island itself.

Further south on the coast, at the hight of La Rochelle, lies Ile de Ré. A fantastic island to spend a few days on. The capital of the island is Saint-Martin-De-Re with plenty of restaurants and life at the harbour front. 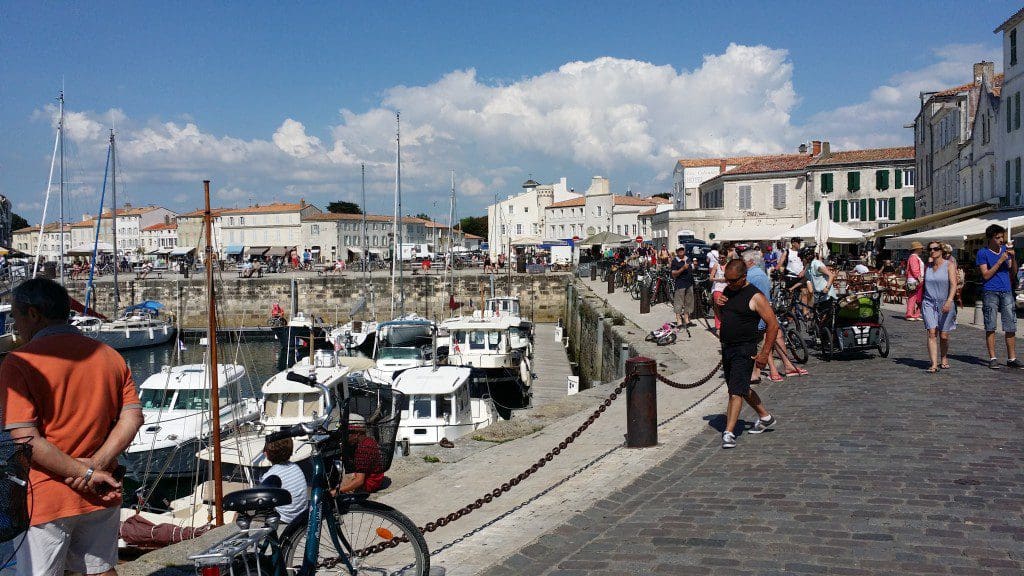 There are also other small villages, great sandy beaches and vineyards and you can rent a bicycle to ride through the vineyards and small roads through villages, which you might otherwise miss. We were lucky, had fantastic weather and thoroughly enjoyed the island. Our hotel, La Maison Douce, is worth mentioning, a quaint place with garden breakfast.

Following the bay to river Dore in Charente-Maritime, entering the winelands of Pomerol and Saint Emilion. Small,

really small, roads across the vineyards to our castle for the night – Chateau Fleaur de Rogues.

A fantastic stay in the middle of the vineyards, enjoying the outdoor pool and an exceptional dinner at the castle restaurant accompanied by the ”house wine”. No ordinary house wine but the real thing.

The area is scenic and the town of Saint Emilion very beautiful. Rather touristy, though. The ride past Bordeaux is pretty ordinary and there the traffic is much heavier. Bordeaux being a major city, ring roads were busy.

Close to the Spanish border, at the bottom of the Bay of Biscay lies Biarritz. A very youthful town and a surfers paradise with huge waves, great beaches and restaurants to choose from. The long waterfront is the place to be seen and masses of good looking people enjoy the promenades day and night. 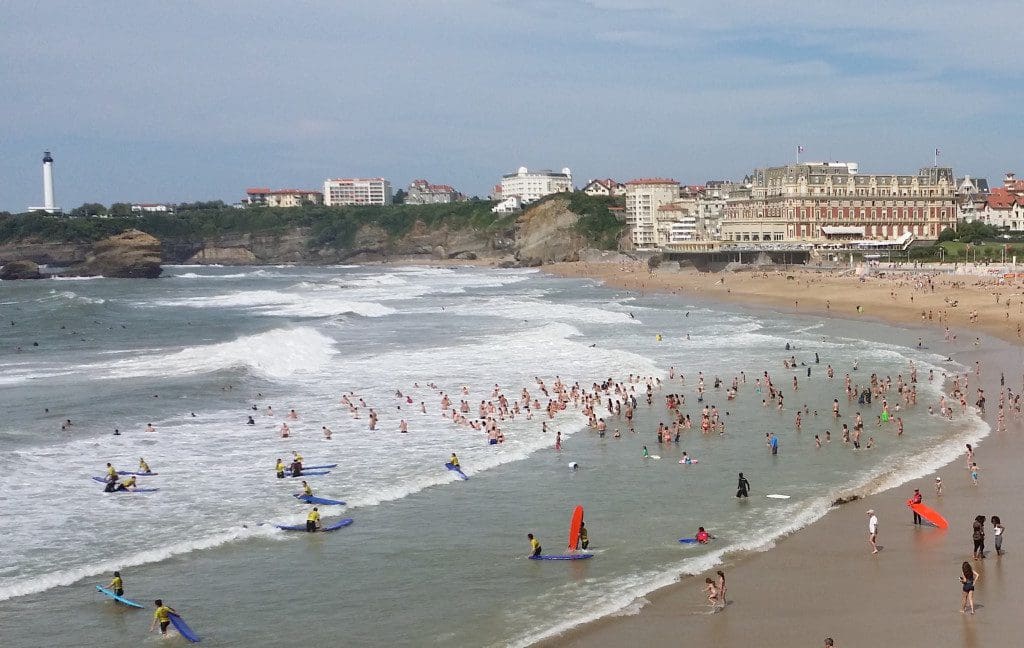 In the evening the restaurants come alive and move more chairs outside. The waterfront fills with entertainers and young people as well as families, even with small children, sit on the beach enjoying small picnic baskets or just wine. A very nice town indeed.

The places to visit in my mind would be the restaurants at the fishing harbour at the south end of the beach and I would also recommend visiting the lighthouse, on foot from the town beach. The town itself and the beachfront are obvious places to explore.

From a distance you can see the mist from the breaking waves flying across the beach and town. If you find salt good for your skin or breathing, this is a place to be. I certainly found the salty air great but it also acts as hair spray. Quite a job to wash off the salt from your hair after a day outside! 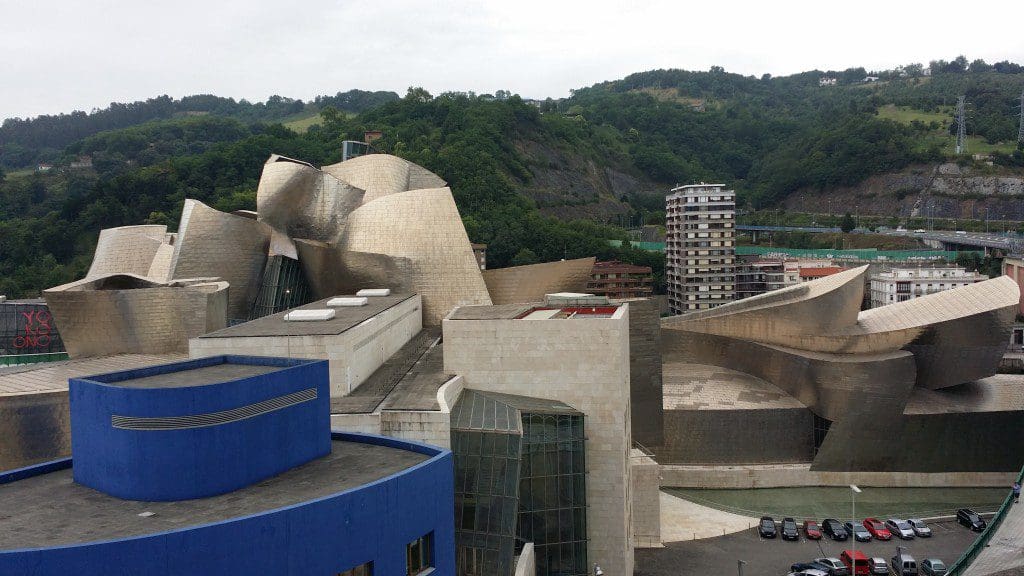 Guggenheim appears to have created an ecosystem of museums around it and Bilbao has a lot to offer for a connoisseur of museums.

Within a nice waterfront walk from the hotel, Bilbao also has a fascinating old town with a lively square lined with restaurants. From the terrasses you can watch the various entertainers and artists while enjoying a glass of wine and local tapas, called pintxos (pinchos). There are many popular (presumably good) restaurants around the city as well as a lively shopping district. Bilbao is much more than Guggenheim.

The longer term weather forecast was turning quite bad for the Atlantic coast. The mediterranean on the on the other hand looked sunny and promising. So we headed for Sitges just south from Barcelona.

The toll road from Bilbao to Sitges is fantastic. Although it is a rather straight motorway, it runs on top of hills, is in great condition and has fantastic views. There was very little traffic and the trip was quick. This however, comes with a cost. I believe we paid some €70 in tolls for the one-way trip. 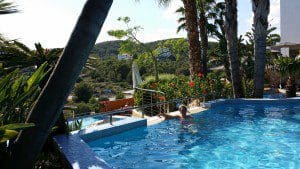 Sitges is a tourist town with plenty of hotels to choose from in the wider area. Golf courses, water sports, etc as one would expect from the mediterranean coast. Sitges is also a very gay town, literally, and  has a lively drag scene. The life choice is openly displayed in the streets and restaurants. Be aware that some of the restaurants are clearly touristic and just not good. See where the people-in-the-know go. Openly gay people, drag queens, etc. Go there and get the best food and service. You may also be entertained! 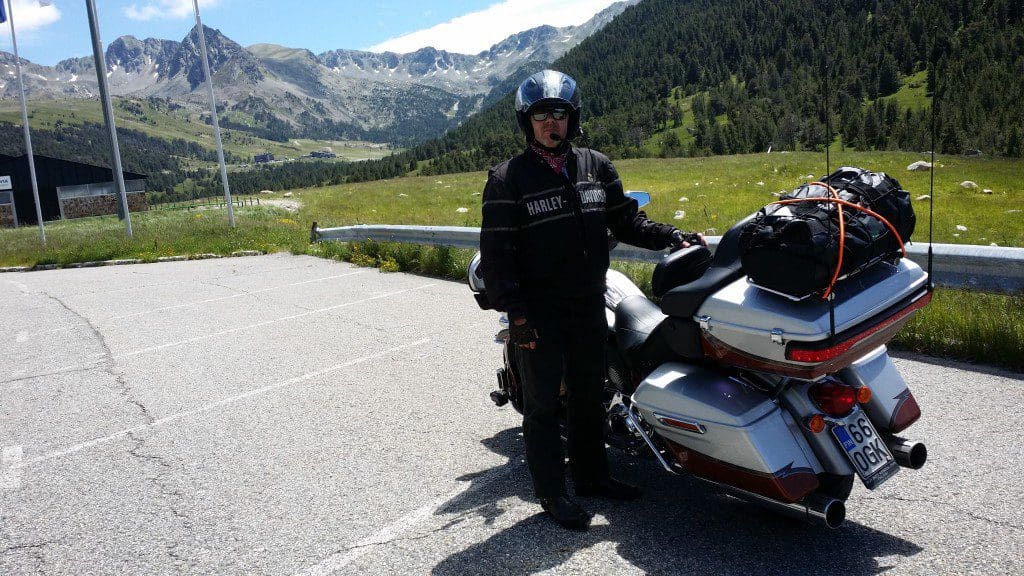 Heading back to France, we decided to ride through Andorra. The road looked promising and the closer we got to Andorra, mountains magnificent. Andorra itself was an anti-climax, nothing much to see along the main road. Perhaps if you take more time to explore the small roads, it would be different. Or perhaps during the ski season. Now it was some tax free shops, chalet type flats and not much more.

Back in France from Andorra. South mid-section. This must be the dullest scenery and perhaps poorest region of France. Nothing much to see riding past Toulouse, heading for Daux, Rocamadour and Tours. 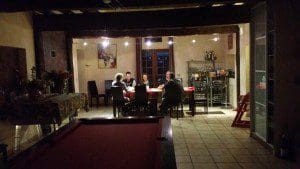 We stayed over is an old farmhouse in Daux – Domaine de Peyrolade – that had been renovated into a hotel and which also has accommodation for quest workers from the old east in a separate building. The hotel had an indoor pool with a small sauna and was clearly a rather ambitious project. We were hosted by the owner couple at the dinner table with three other quests. What a great night! Recommended!

Even our hosts declared that ”there is nothing” along the route north but taking a detour pays off. Rocamadour for one is a place worth visiting. It may be touristic but certainly different, built on the side of a cliff! Some houses appeared to be just half of a house!

Our next stop was Tours. Just escaping a heavy rain shower, we found our hotel Oceania L’Univers Tours. This is an old hotel with a fantastic lobby area and good access to town for a walk.

From Tours it was off to riding past Paris and to the Champagne capital of the world – Reims. In Reims we found a rare snob, who did not want to accommodate a couple on a motorbike. Of all the places at a Holiday Inn in the city centre! I had chosen the hotel as it had private underground parking for the bike and I knew they had space for us. Long story short, the snob explaining they were full, I walked outside and made the booking through hotels.com and walked back in. The snob git pulled a few other tricks during our stay but his colleagues sorted things out for us with free drinks and free breakfast.

Reims is the champagne capital and a really beautiful town. Again with classy, good restaurants serving meals fit for champagne. Even the bins outside were lined with empty champagne bottles instead of the usual beer cans. We had dinner at the famous Cafe de Palais and the experience was pure champagne! 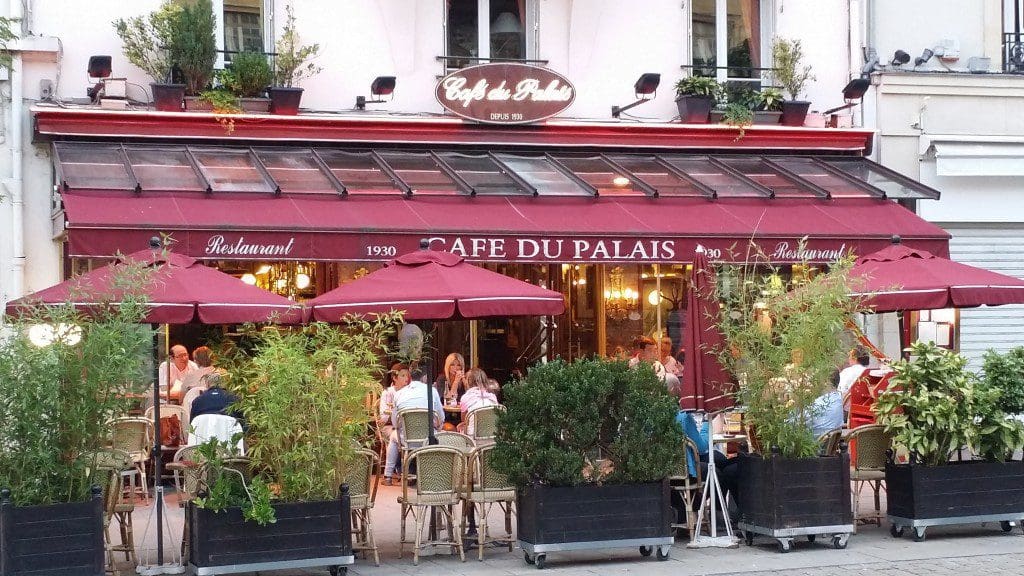 At this point our tour de France was coming to an end. Tomorrow is the world cup finals and Germany is playing.