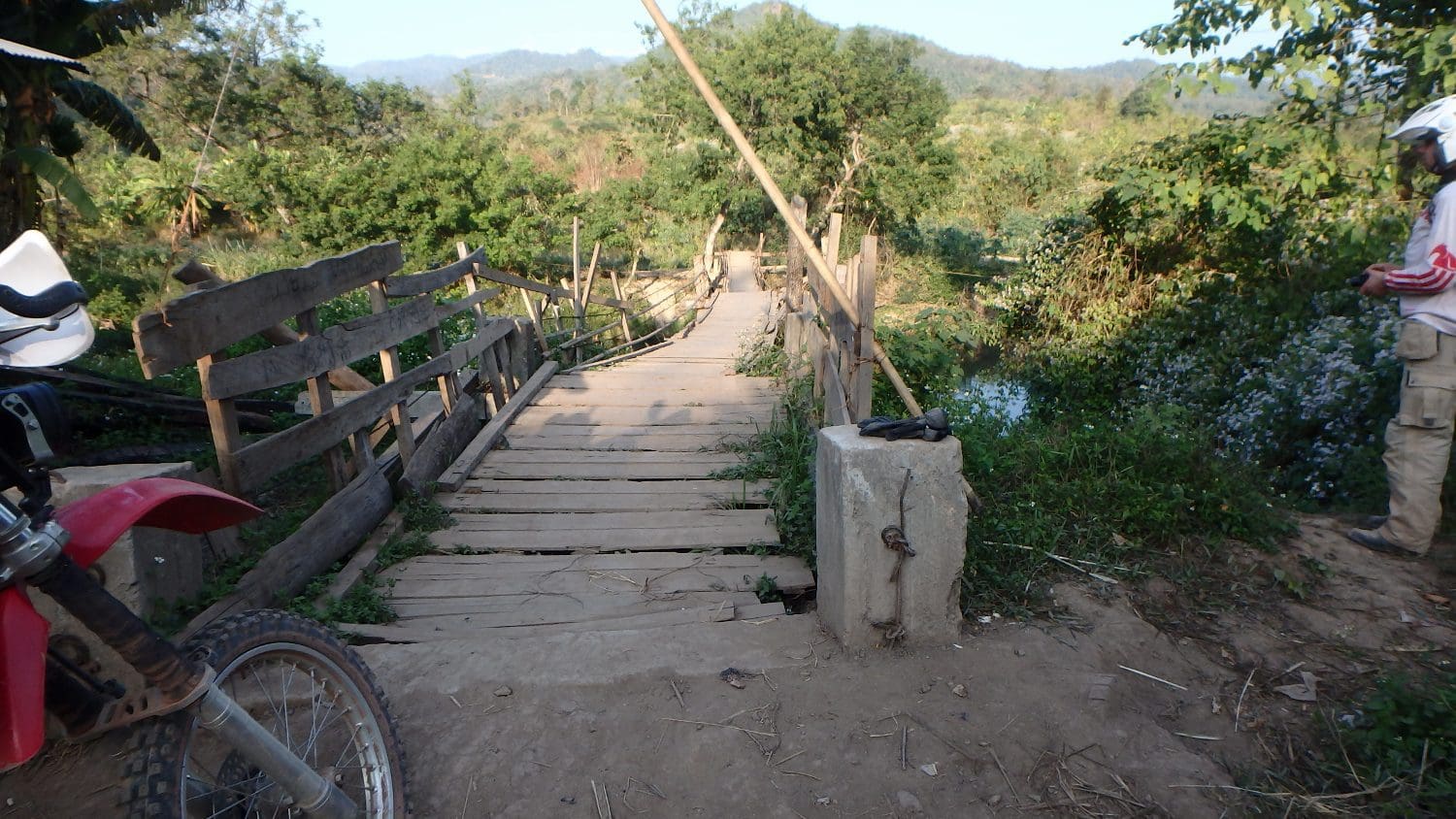 Our team started to come together on the flight from Bangkok to Vientiane. Severi met us at the airport to take us to the City Inn hotel in the centre. Tired after a long flight (for some) and a long night in Bangkok (for some), we had just enough energy to visit the Patuxai Arch or the Arc de Triomphe of Vientiane in the town centre and a few beers and dinner. 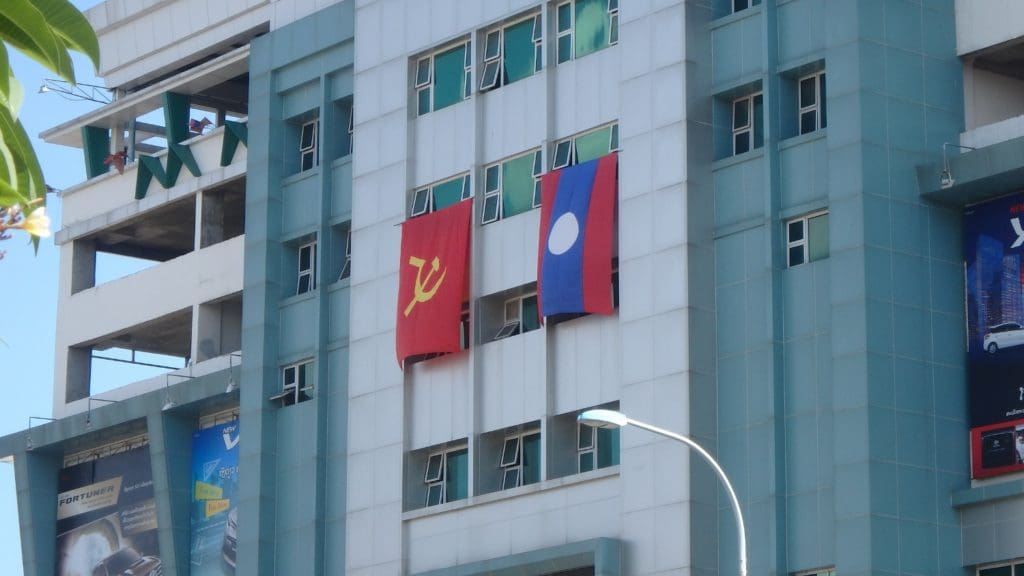 As most Asian cities, Vientiane is a lively place with vendors of all sort almost everywhere.

Our bikes were provided by Don Duvall aka Midnight Mapper, adventure biker and round the world sailor, who has anchored in Laos for the past eight years and even sold his boat last year. Don gave us a short briefing on riding in Laos. No healthcare. Closest treatment is in Thailand. You do not want to get into a Lao hospital. You do not want to have an accident with a local. Nor their dog or their chicken. Also some advice on how to deal with the police to ensure the trip continues, etc.

Bikes were just serviced and ready for ride. We also needed some of the bikes Don normally does not rent out but rides along with them. After some adjustments, the only problem day one was a slipping clutch. The clutch was promptly sorted later when we met Don in Phonsavan.

In the evening stroll we were able to admire some custom Vientiane – bikes, cars, scooters. Surprising – well, for me at least.

And after some 100 km, a punctured tyre with a nail sticking out!

The ride from Vientiane to Paksan was the normal exit from the city and main roads leading out of town, Mekong on the right. The traffic is relatively organised, though to a western eye somewhat chaotic, as one would expect. More cars than I expected and mostly good and new – Toyata, Huyndai, Kia, some Hondas and Mercs.

A short stop at Xieng Khouan Buddha park was quite amazing and the rode turned dusty. Very dusty due to roadworks stretching easily some 50 km. These are the kind of roadworks where you do not see anyone working but the road is just gravel and very light grey and red dust, which goes absolutely everywhere through your clothing.

We reached Paksan early evening at sunset and enjoyed our dinner at a riverside restaurant with some night caps in a small restaurant next to our hotel. The hotel was nicely between Mekong and a smaller river running into Mekong.

Navigator indicated a long ride for this 270km stretch. Well, it took 11 hours and three punctures from Paksan to Phonsavan. This would be the norm from now on.

The road was varying gravel with some paved stretches, and climbed to 2000 meters before Phonsavan. On the hills the weather was turning really cold and a fog finalised the coldness. Beautiful scenery made up for any inconvenience but as our ride took longer than expected, darkness fell and we rode in the dark for the last hours.

One of our team started having problems with his rear tyre, which was changed three times during the day. Luckily there are tyre shops usually close by and if everything else fails, eventually local vans or van-buses can carry the bike.

A fantastic day once we got on the bikes. First thing, we visited the plain of Jars. A plain with a few thousand stone jars from approx. 500 bc – 500 ac and no one knows who made them and for what reason. A few bomb craters as well, and we know who made those and for no reason…

Later Don turned up in Phonsavan and made all the necessary repairs on the bikes. He also led us through one of the most exiting roads ever.. Once we were through the gravel, we entered the jungle and the off-road section. What a road (?)! Hills, rice fields and jungle.

Very soon after leaving town, we were on new gravel/pebble road. This did not last long before the off-road section started, many places un-passable by car, most notably crossing a river on a flimsy suspended bridge. On the way we visited some of Don’s friends and an old gentleman took us across the rice pads to see an old Wat – or temple ruins in plane speak. Some riding in the woods was nice!

Perhaps we had a bit too much of sight seeing and eventually we found ourselves fighting time and had to push hard to get to the hotel in daylight. Tough day riding with many happy faces in the evening at the hotel. Again a cold evening and night.

In the morning a short tour of the town market with all kind of food items you would not find in most European markets. Every part of an animal is used for food. The sun was getting higher and the day was getting warmer and it looked like a nice day for a ride…

New years eve! A fantastic ride to Luang Prabang, a very french picturesque town with a lively tourism industry. The town seems to live in a parallel universe with all the western tourists and many-fold prices compared to the earlier towns we have stayed in. This time the ride was first 100 km on gradually deteriorating tarmac and eventually just gravel. The last 50 km again on one of the best riding roads with reasonably (with occasional reminder that we are in laos) good surface and winding bends, making the progress quick and easy. Bar an other flat tyre with one of us. We lifted the bike on a local minibus and got on the road again…

Riding through the villages was an experience. Kids shouting, waving, high fiving – while we rode by – wonder how long it will take for their hands to recover. I had my cloves on and I tried to ride slowly. Still a fiver was quite a slam. The villages were all full of small children and young families with all kinds of farm animals running free. Pigs, ducks, cows, goats, dogs, cats, etc. Very few old people. Makes me wonder… 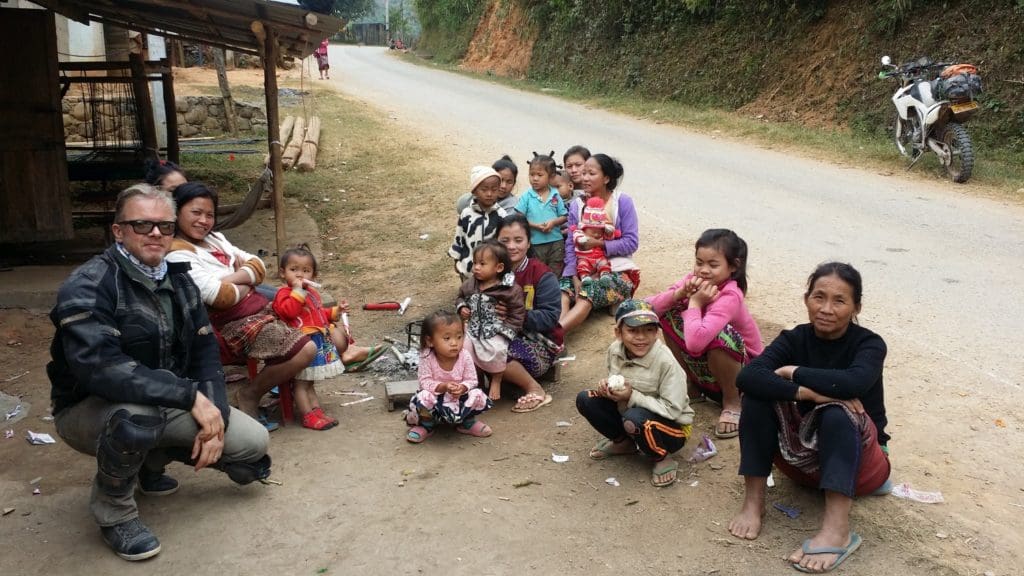 We also met fellow motorists on the road. A couple from Kent was riding on a scooter two up. If they are still together, that marriage will last!

The weathed got warmer and New Year celebrations at Nigt Market was a blast in a warm evening. Also a blast from the past with local politician’s speech flattening the atmosphere but the party soon picked up with fireworks and confetti filled the sky and air. A new year’s eve to remember on the Mekong river.