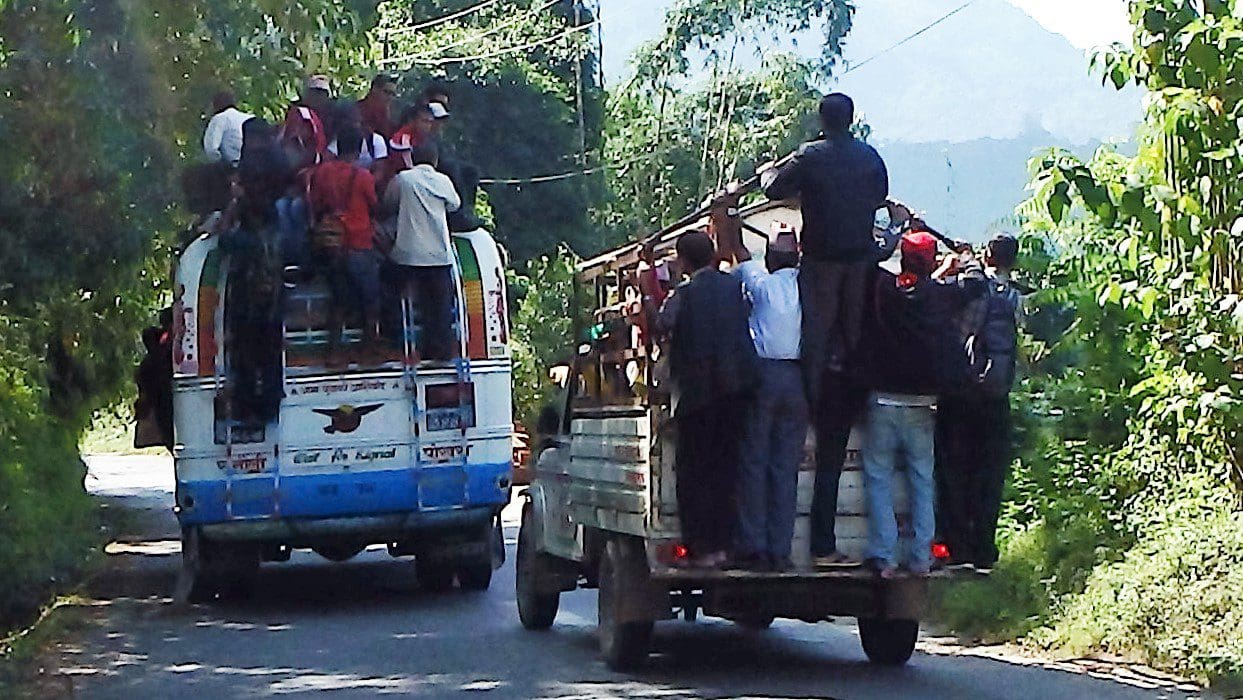 (Sign on the road side) Sidhartha Highway runs from Pokhara, past Tansen to Butwal. The road is spectacular with continuous turn after another, climbing high and passing through several towns. Now I must say that I am lucky to have fuel when most cars and bikes are off the road. This road would have been herendous in heavy traffic. Even now when trucks slow down trying to climb the hills, other vehicles, mainly busses of different kind, cut both lanes in the very tight corners leaving barely enough room for a motorbike. And no room at all if the oncoming traffic is bigger than a bike. Since the traffic was low, I saw only two accidents.

I stay overnight just outside Tansen and I am gutted that my GoPro run out of juice just before the town. Tamsen is fantastic with unbelievably steep and narrow roads leading through the town. At one point I thought my bike might not make such steep uphill and the roads are actually grooved sideways so improve grip. Shoes or tyres. Many roads are just too narrow even for a car to pass through. Tomorrow on the way out is my second chance. Today, as it is Sunday, people were dressed up in colorful clothes and looking stylish.

(My new t-shirt!) From Tansen I set off to Sauraha in Chitwan National Park. Now this is something different again, a tropica jungle with crocodiles, tigers, rhinos, etc. The East-West Highway from Butwal is actually a fairly decent road. Nothing like the ones I have ridden here earlier. It is wider and smoother and has very long straight sections. It is a toll road and 5 rupis were promptly collected – that is 5 cents US. In Bharatbur I stopped at a Royal Enfield dealeship as my start engine stopped turning. The guys at the dealership looked at the bike from a safe distance and since it starts well with the kick start and runs well, the recommendations was ” just keep kicking”. As much as I have seen so far, Nepal is by all western measures, basic at best. The people are poor and first time I see houses made of sticks and clay. After the monsune season they need to replace straws hay and mud each year.

Now that the blockade at the Indian border has continued for so long that not only petrol and diesel, but also gas and foodsupplies start running out.My first hotel was closed with one man keeping guard. No gas, no food. He was very helpful and took me to two other hotels, same deal. Eventually I found a hotel open and with food, I was their second quest. It is heartbraking to see the hotels, small shop owners and guides struggle through the what was suppose to be their pay-day. High season. I will leave some money behind and now it’s elphant rides and canoeing in a canoe carved from a single trunk of a tree.

The guide had good stories… “Here a man was eaten by a tiger two weeks ago. Also their buffaloes get eaten by tigers as the let then too close to the jungle. Here a man was killed by a wild elephant.”As a crocodile was only a few feet from the boat I was lucky I was sitting in this single trunk little boat. “Do the crocs attack these boats?” “Yes, sometimes. But now we go for a walk!!!” Lived to tell the tale.