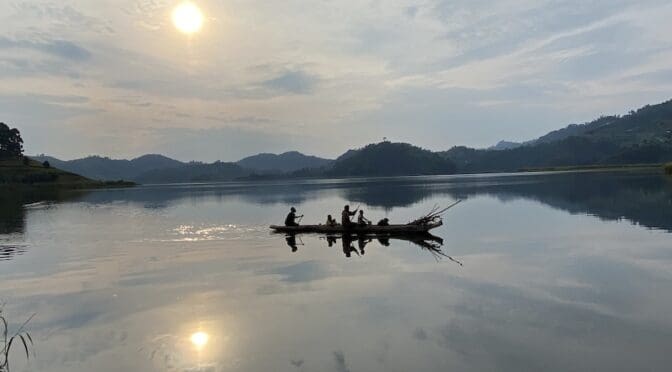 Getting there feeling welcome

Our ride in Uganda started with a flight to Entebbe on Lake Victoria, just outside the capital city Kampala. This time it was two friends Jussi and Pade and myself. Late arrival to our hotel Via Via Entebbe, where the very helpful Linda re-opened the bar for the thirsty travelers. Immediately we felt welcome to Uganda!

One of the reasons why Uganda is called the Pearl of Africa is the fact that it is green in large parts most of the year. Arriving just after the rainy season, we got the best of the lush green landscape. A point of interest is the fact that some of the 1940’s Tarzan films, starring with Johnny Weissmuller were filmed next to our hotel at the National Botanical Gardens with their rainforest providing the backdrop for the films.

Rains earlier had been substantial and Lake Victoria was now 1,5 meters higher than usual, causing some local flooding disturbing some resorts and swallowing popular beaches. But now the weather looked good.

It was very hot on arrival but as most of our tour would take us higher, also some cooled air was expected, though we were right on the equator. Located on the East African Plateau, Uganda’s average altitude is 1100 meters (3609 feet) above sea level making it generally cooler and greener. The general landscape of Uganda slopes towards South Sudan in the north and our route would cross through to Lake Albert and continue round the south.

Getting ready and on the bikes

Our bikes on this trip were Honda xr 400’s, which were ideal for the rough terrain and manageable also on transit stretches. We had the best possible expertise planning our trip with Maxime Van Pee drawing the route. Maxime is Captain of the National motocross team, he is 6 times national champion and 3 times east African Champion. A well-known figure in Uganda, we found on our tour.

We also had a guide riding with us – Seki, who is also the mechanic for the National Motocross team and a very competent motocross rider as well. Although our bikes had perhaps seen their best days, we were in good hands and raring to go!

As a general note on adventure travel, even with the best of plans, things happen on the road. But it would be wrong to say most of them are unexpected, although one can not say when exactly they will happen – tire puncture, mechanical issue, getting lost, unplanned ride in the darkness. One should expect that these happen. As they did for us as well! The spice of motorcycle adventure travel! With a good and experienced team you can push the ride a bit further and solve these issues without any major problems – making memories and new stories to tell. 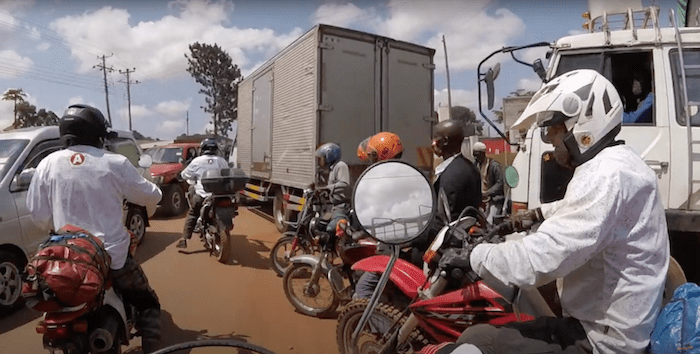 The ride through Kampala was horrific in the busy traffic and took us some three hours. But as soon as we got out of the city, the transformation happened with the traffic gradually easing and the scenery getting more open, green and beautiful towards the Murchison Falls National park. We were now near the source of the River Nile and started feeling the adventure! From here onwards it was great riding in the savannah, forests and off road terrain.

Due to Covid-19 restrictions police control stops were frequent and not many tourist travelers around. Locals were discouraged to travel between villages and police was checking their reason for travel. As tourists would arrive vaccinated and with negative corona tests being mandatory, they had more freedom to move. In many hotels it was just us three staying. 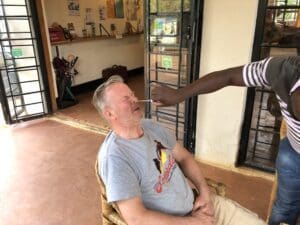 Covid-19 measures were strictly followed everywhere. At every stop, be it a road-side restaurant, shop or a hotel, hands were washed and sanitized – sometimes even gloves were sprayed with sanitizer and face masks were mandatory. Temperature was measured from forehead or arm. In Entebbe we were sanitized and temperature checked before entering a shopping mall car park. Then again before entering the mall itself and again when entering a shop – every shop! National Parks or remote areas made no difference, people were well informed and measures were in place everywhere.

The gorillas are very strictly protected in Uganda and access, even to locals is controlled. Gorilla forest starts from the side of local farms but people know not to venture in the gorilla territory. The rangers however, locate the gorillas every day and visit them every day to maintain friendly and trusting terms with them. As the terrain in the jungle is difficult with steep hills, tourists and guides use walking sticks to assist walking and climbing. When gorillas are close by, these sticks are collected and no-one has one. We were told that this is because gorillas get scared as sticks remind them of poachers rifles.

We were lucky, on the day, gorillas were not very far and we were able to spend an hour admiring these wonderful animals from a very close distance. Sometimes less than 2 meters between us.

Bwindi Impenetrable Forest provided a hint in its name and due to the heavy rains and landslides we were forced to turn back very close to our destination for the day – providing us with another adventure! We were forced to take a detour, eventually getting lost in the dark of the night and on very tough riding terrain. On top of being lost in the darkness, it started to rain and gps/mobiles were running out of juice. This nighttime adventure took a turn for the better when we encountered a police stop and were told “They have been looking for you!”. Our guide Seki had a problem with his bike earlier but was again on the road and we met again soon after the police to find the road to our lodging. All well again and with a story!

Villages and houses in Uganda vary a lot. Some use bricks while some are made of sticks and muds. Bricks are being burned everywhere. Stretches of Chinese built road are appearing here and there, sometimes starting and ending without no apparent reason for their existence for a casual rider. 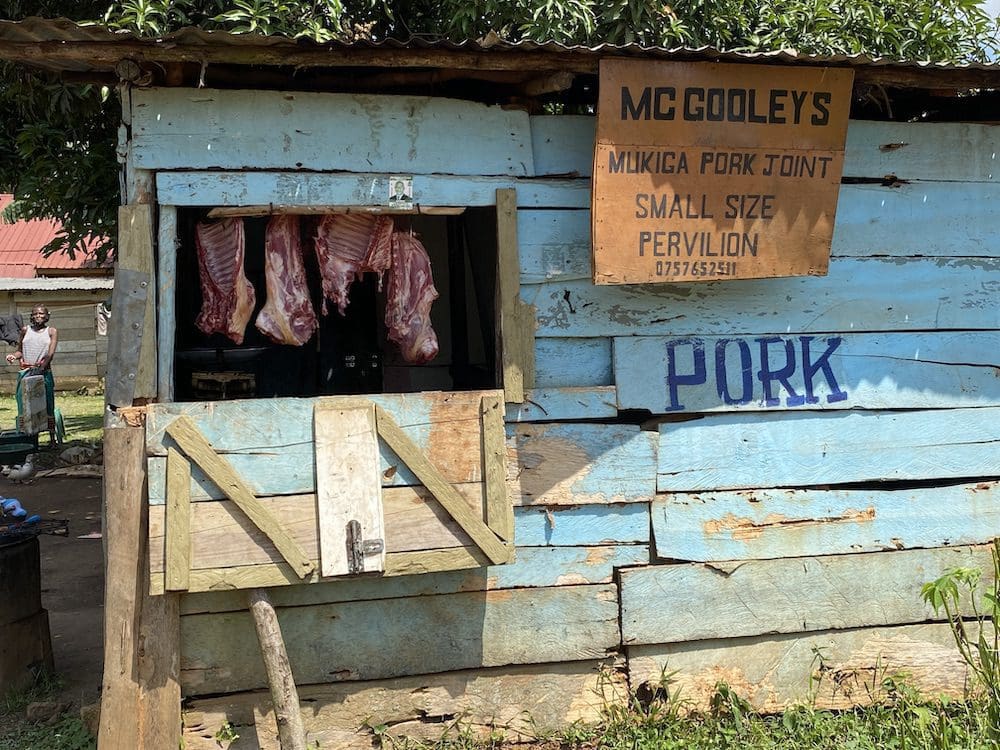 Small business is thriving and every time someone stops, their vehicle is surrounded by (usually) women selling food and fruit of various types. Bananas being one obvious item grown in Uganda, as is the huge Jack Fruit.  Tea and coffee plantations also stretch far in the horizon. 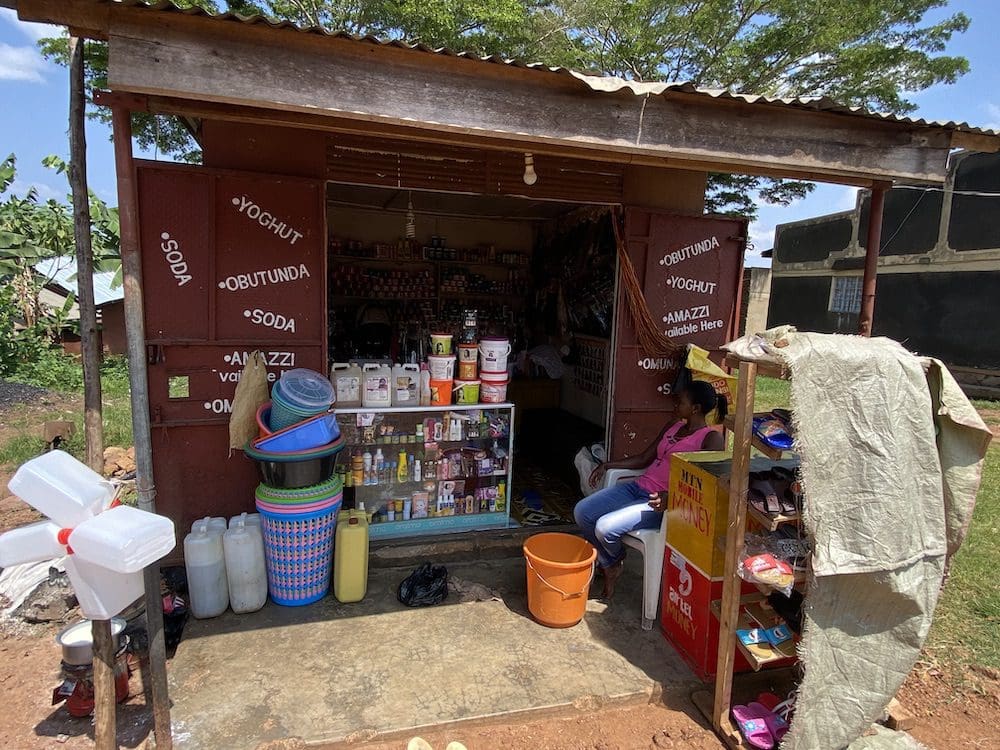 While various types of fruit exist, we met youngsters in Hoima who had never eaten an apple, which we offered them from our hotel lunch box!

Usually there is no electricity in hotels at national parks or remote places during the night. Even on the daytime, sometimes only occasionally. Solar power and generators are used for electricity. Same goes with many villages and small towns. Night-time it really is dark! 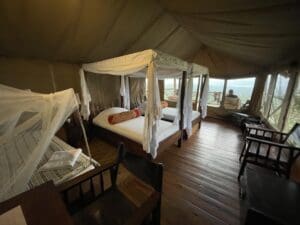 Our lodges and hotels sometimes had a large tent with beds for us, sometimes a more robust structure and sometimes a combination of the two. Often with a mosquito net over the bed and a net over the tent to keep away unwanted animals such as monkeys, who would steal anything. Net would also allow air to flow through without any need for other air conditioning.

Zips at the tents had to be locked with a padlock, otherwise the clever animals open them easily. Some places require a guard to escort you from the tent to the main building. Guards keep a lookout for any potentially dangerous animals that may move around.

Some of our lodgings were pretty basic, some simply fantastic.

Uganda is clearly developing fast, investing in tourism and providing some fantastic places to visit. People are very friendly. There were very few places where the locals have adopted a more laissez faire -attitude – Kitagata hot springs is best avoided and the only place which left us feeling uneasy. 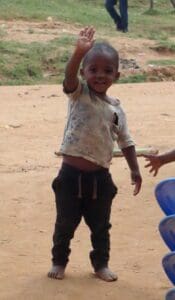 With the one notable exception, Uganda is a great country to visit and I will certainly be back one day! 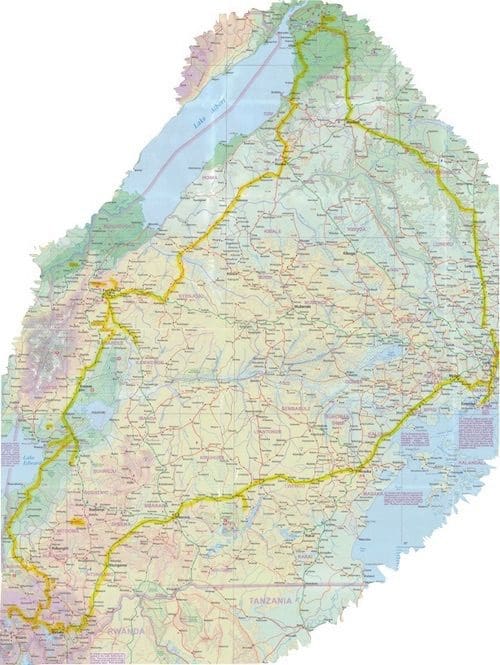 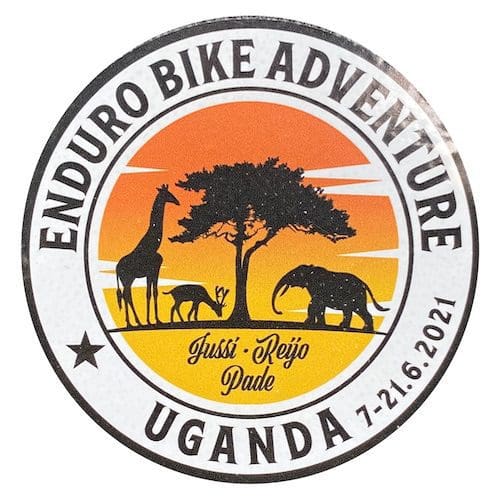